An exceptionally fast skid-steer operated (universal mount) levee building machine. The Instee Levee Builder® can produce an 18in high Fast-Built Levee® at the rate of 400ft per hour. This kind of Fast-Built Levee® is stackable and can create levee barriers of substantial height. It was designed to use sand or clean fill dirt, which is cheaper than sand, to protect property, stop beach erosion, and contain spills.
Creates an easy cleanup, stackable, Fast-Built Levee®
Fast-Built Levees® replace the need for sandbags in all flood applications (except those in very tight spaces where sandbags may still be required)

Operating the Instee Levee Builder® requires a skid-steer loader and operator and a second skid-steer and operator to tender sand into the hopper for uninterrupted levee production. Thus a two man crew (Each operating a loader. One loader with the Instee Levee Builder attached and one loader with a bucket attached so as to dump into its hopper) can operate the Instee Levee Builder at high speed and efficiency or perhaps even greater efficiency with a third person to serve as a laborer loading plastic poly tube. In this manner an 18in high Fast-Built Levee® can be produced at rates greater than 400ft/hr. This is a sandbag equivalency rate of greater than 4,800 sandbags per hour and greater than 100,000 sandbags per day! Furthermore, This Fast-Built Levee® costs only a few dollars/ft! Compare this with the cost of sandbags!
We welcome your questions and look forward to assisting you so please call us: 1-800-557-9024 or visit www.progressiveinnovations.com 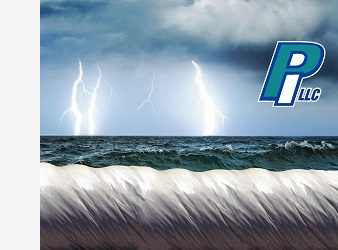